Now that the crazy and unpredictable Spring 2020 Covid19-semester is finally over, and since I’ll now be spending my entire summer in Kansas rather than in Spain and Mexico, I am working to shift my focus back to writing and research for the month of June. Starting with a blog post seemed like a much easier and more enjoyable way for me to get back into writing-mode than diving straight into an academic article… although I still spent many hours finalizing this short, informal post. Based on a few things I’ve been reading and thinking about over the past few weeks, and to continue with my first two posts of 2020 on recent publications on contemporary Spanish feminism and women in rural Spain, I wanted to discuss an excerpt from another fabulous set of books I brought home from Spain last summer: Carmen de Burgos. Colombine. Periodista Universal, edited by Concepción Nuñez Rey and published by the Consejería Cultural, Junta de Andalucía in late 2018. These two volumes are an invaluable resource to scholars not only of Carmen de Burgos or first-wave Spanish feminism, but of early 20th-century Spanish literature and culture more broadly. In them, Nuñez Rey has compiled more than 10,000(!) essays and newspaper articles that Burgos, often under her pseudonym “Colombine,” wrote for popular Madrid-based print media between 1900 and her death in 1932. Both volumes together — an astounding 1400+ pages — cost only 20 euros via Tiendas Culturales de Andalucia; 10 euros extra to ship internationally to the US (which is still a bargain $33 at the current exchange rate). 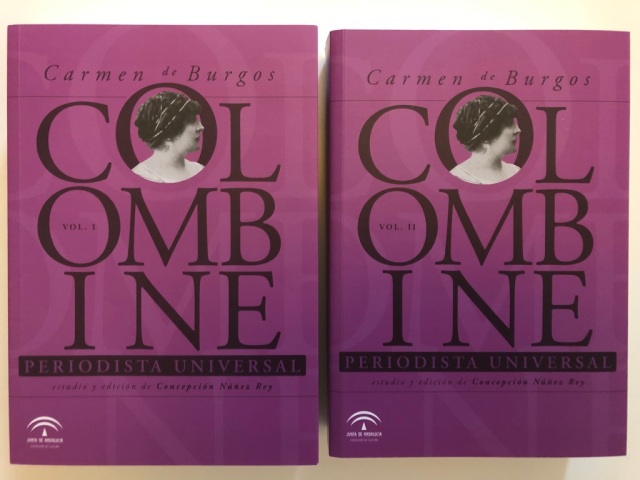 The covers of Volumes I and II. Image mine.

These volumes represent an enormous amount of labor on the part of Concepción Nuñez Rey, professor of Spanish Language and Literature at the Universidad Complutense in Madrid, who spent more than two years compiling and organizing the essays, information, and commentary they contain. Volume I presents an introductory biography on Carmen de Burgos with a discussion of the historical context within which she was writing. Following is the chronological organization of articles that she published between 1900-1914, with topics ranging from women’s rights and early feminist activity (women’s education, suffrage, factory work, divorce) to broader societal problems (illness and hygiene, prisons, death penalty, education) to her international travels (France, Italy, Argentina, Germany) and involvement in various literary and intellectual circles. Volume II covers 1914-1932, and includes topics related to World War I, her extensive travels to Portugal and the Americas (Cuba, Mexico, and Chile), her increasingly more progressive feminism, and her support of the Spanish Second Republic. Again, there are over 10,000 essays included in these volumes and, given Burgos’ prolific publication record on an almost innumerable array of topics, they contain many lesser-known, niche articles that were previously difficult to procure or even locate in databases. Essays are organized chronologically, and Nuñez Rey has grouped them together under broad themes, providing short introductions to each section that contextualize Burgos’ professional activities and personal life at the time. 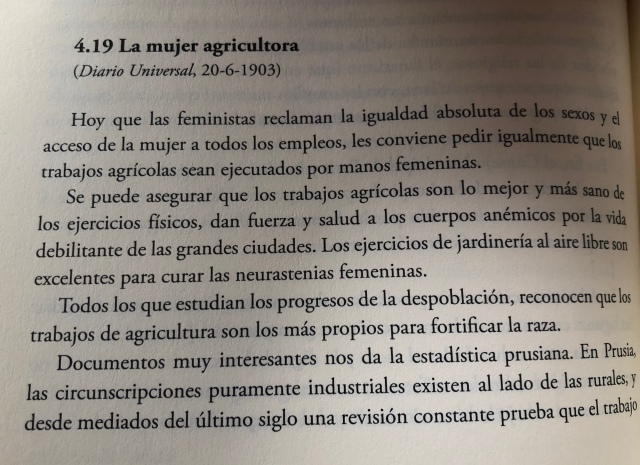 For this post, I want to highlight a 1903 essay — see image above — that caught my attention given my recent interest in and appreciation for Maria Sanchez’s essay-narrative on women in rural Spain, or “España Vaciada” (Empty Spain), which I blogged about in January and integrated into my Spanish Culture course in April. Burgos’ essay, “La mujer agricultora,” or “The Female Farmer,” published June 20, 1903 in the Diario Universal, is only about 2-pages in length (pp. 146-48, Volume I) and touches upon several issues that Sánchez brings to light in 2019 concerning women’s labor, rural vs. urban living, and depopulation of the Spanish countryside. The title of the essay and much of its contents also reminded me of several pieces of art from this time period, so I thought juxtaposing some of Burgos’ ideas with a few early 20th-century Spanish paintings would further contextualize and expand the scope of her concerns on women and agricultural labor. While there are, unsurprisingly, a few comments that are problematic or essentialist to today’s 21st-century reader — like her generalizations about women’s labor or disposition based on biology or “nature,” and even phrases that could stem from late 19th-century eugenics discourses (fortificar la raza, evolución, hereditario) —  much of what Burgos argues in this short article pertains to her consistent concern with educating women and affording them a legitimate, compensated, and safe place in Spanish society where they have agency to express their own interests and talents and to choose their own life or career path. The driving force of her essay is that Spain should promote and provide an “agricultural” education for women, just as in England there are institutes dedicated to the study of Agriculture and Horticulture. 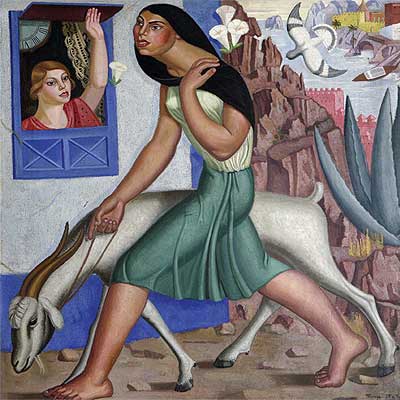 I first thought of Maruja Mallo’s 1929 painting, “Woman with goat” (above) when Burgos discusses the physicality of agricultural labor and societal perceptions of whether women’s bodies could or should perform this labor. This painting, and others by Mallo, has been praised for its depiction of a physically strong woman moving freely and independently outside the confines of the home. While interpretations and analyses of this work are vast, for the sake of this post I’m focusing on those that highlight a new, alternative representation of femininity based on strength and independence. Combined with its clearly rural setting, this painting becomes — in my mind — an excellent representation of Burgos’ argument in support of outdoor activities and labor for women, as well as her anticipation and rejection of patriarchal critiques that will center on men’s desire for women’s bodies and appearances to remain “traditionally feminine”.  In the quote below, Burgos cites the bicycle as justification for women’s abilities to engage in physical, outdoor labor, a reference that may seem comical today, but that is well in line with early 20th-century views — and fears — of the bicycle as a promoter and symbol of (dangerous or erotic!) female agency. This is the reference that prompted me to think of Mallo’s “Mujer con cabra.”

Similarly, Mallo’s later paintings, Canto de espigas and Sorpresa del trigo (both below) — from a 1936-39 series she titled La religión del trabajo, of The Religion of Work — celebrate agricultural labor in the rural Spanish countryside, and they feature strong women as the central focus. In her article (below), Burgos speaks of the beneficial effects of rural labor on the healthy and physicality of both men and women. She also acknowledges that “those concerned with aesthetics” will argue against educating women in Agricultural and Horticultural labors given their fear that they will lose their harmonious figure, grace, and charm… a transformation that Mallo’s paintings, produced thirty years later, clearly celebrate rather than critique. 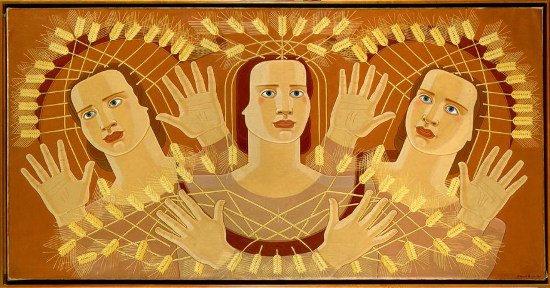 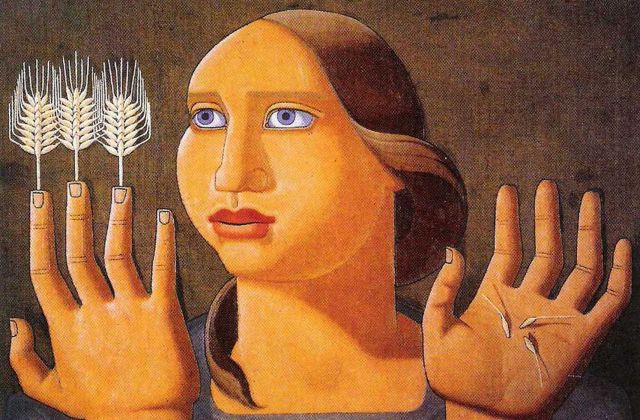 “Sorpresa del trigo” [Surprise of the wheat] by Maruja Mallo (1936). Image via Reddit.

Importantly, much of Burgos’ argument hinges on the contrast between the urban and rural environments. In the above, second quote she blames the “debilitating” nature of cities for creating unhealthy, “anemic” bodies. Similarly, in the below excerpt, she lauds work in the countryside for having the potential to save women from becoming “victims” of the “factories and vices” of the cities. Her descriptions of women’s urban labor made me immediately think of the tobacco, or cigar factories. While they provided well-paid manual labor for working-class women — known as cigarrerras — the job came with extremely long hours and significant long-term health concerns from the crowded, enclosed, and dirty interior spaces. The below paintings of Seville’s “Fábrica Real de Tobacos” by Gonzálo Bilbao Martínez, capture this atmosphere… clearly the antithesis of the colorful countryside depicted in Mallo’s “Mujer con cabra.” 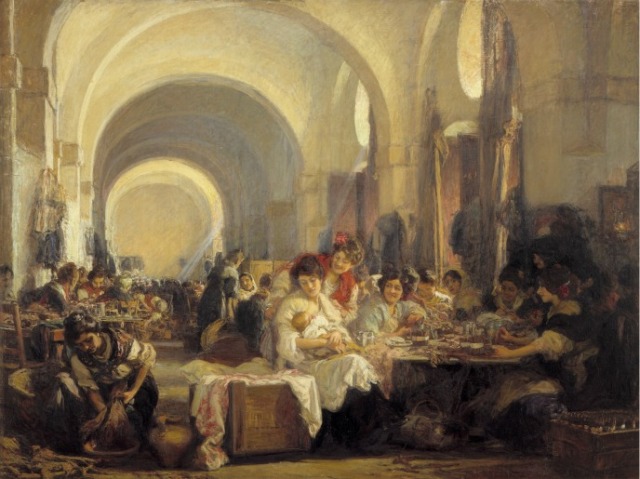 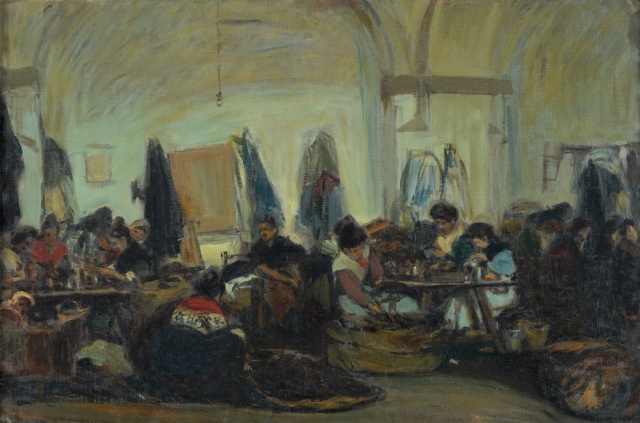 Finally, the last paragraphs of “La mujer agricultora” center on the description of and praise for the Swanley School of Horticulture in England. She discusses the training offered at this “Horticultural College” or Gardening School, and how it had grown and transformed from an Institution for men to one in which women became the majority. I have not yet done much research into this school and its evolution to confirm Burgos’ description, although this 2003 article, “Horticultural Education in England, 1900-40: Middle-Class Women and Private Gardening Schools” (by Anne Meredith) discusses the college as being “for women.” Regardless, in 1903 Burgos was clearly aware of and admired the education this college offered women, and she lamented the fact that Spain did not have such opportunities. She ends with a discussion of gardening, which she appears to view as a more appropriate activity for middle- and upper-class women, in private residences or public gardens. This immediately made me think of the paintings and home of Joaquín Sorolla, as I visited his former residence (now a museum) a few years ago in Madrid. The Sorolla Museum boasts amazing gardens in the midst of the city, in addition to a diverse collection of the artist’s paintings. Below is his portrait of his wife, Clotilde, in their private gardens — which again contrasts dramatically, this time in terms of social and economic class — with Mallo’s painting of the woman with a goat. 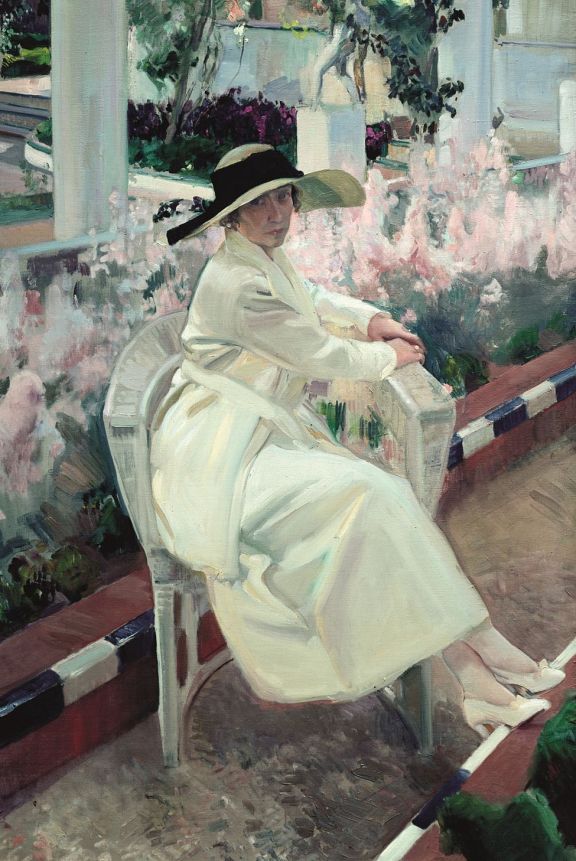 Below are a few of Burgos’ comments on women’s purported proclivity for gardening: 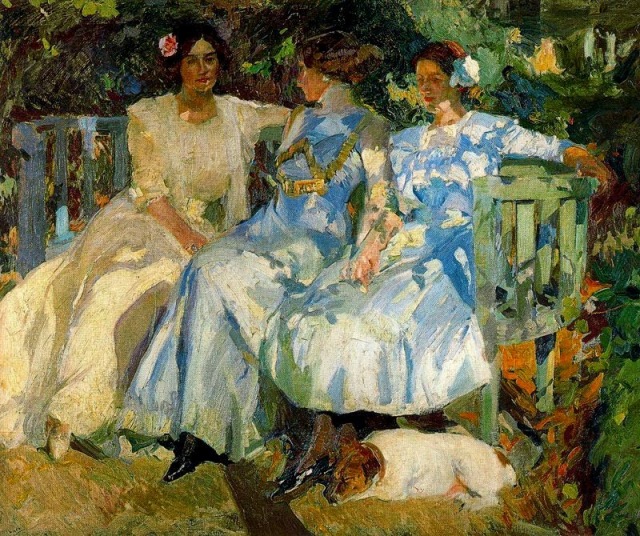 My Wife and Daughters in the Garden by Joaquín Sorolla (1910).

As the above excerpt reveals, Burgos considered gardening to be a job or career particularly suited to women, and one that could afford them a potential income. This is most striking to me, even radical for the time, as gardening or the care for private gardens would have most likely fallen under the category of women’s work — that is, unpaid labor performed by a wife or mother, or poorly paid labor performed by a maid. There would be exceptions of course, but we can look to the Sorolla gardens as an example. In searching for the paintings I came across this article in Spanish on Sorolla’s gardens as works of art, within his (painted) works of art. The article discusses his love for his gardens and the care he took of them… yet only at the end acknowledges that his wife, Clotilde, also spend a great amount of time ensuring the gardens were a beautiful, thriving oasis in the city center. Sorolla was an especially prolific painter and he traveled away from home considerably, so I would wager that Clotilde was far more involved in or responsible for the “art of the gardens” than some histories may recount. 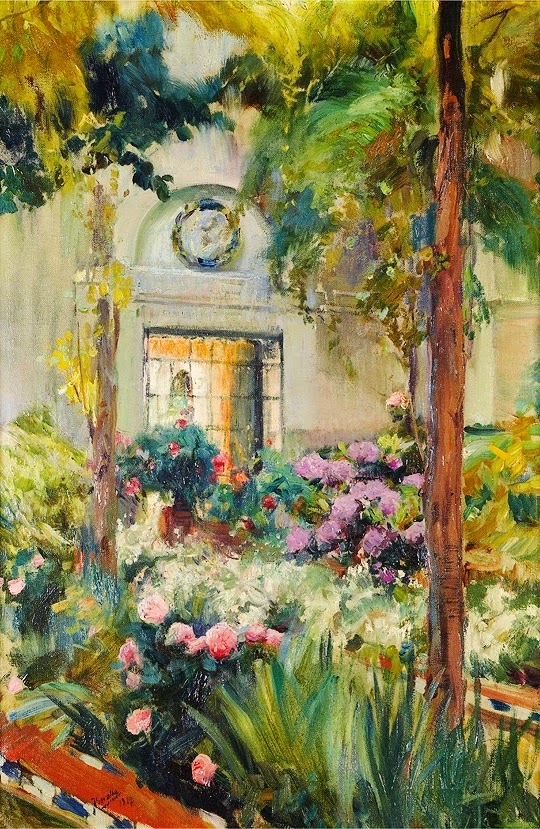 It seems my first post-pandemic attempt at blogging ended up being quite lengthy and has clearly given me a lot to think about. Hopefully this means I’m back in writing- and research-mode for Monday (*fingers crossed*). Ending this post with so many beautiful paintings of Spanish gardens and recalling my trip to the Sorolla Museum is making me especially nostalgic for Madrid — where I should be right NOW… with fifteen students! Unfortunately, my study abroad program was cancelled this summer and I’ll have to wait until next year. In the meantime, I’ll end with this lovely picture from one of my many walks through Retiro Park during last year’s trip. 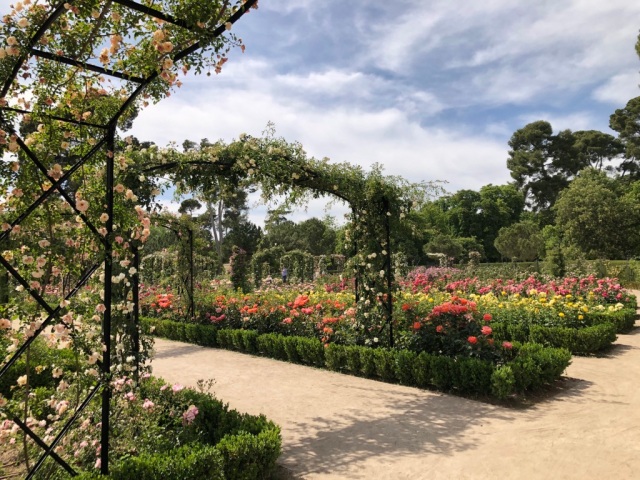 What other early 20th-century paintings or texts connect women to gardening or farming? Do they acknowledge or ignore… celebrate or critique women’s engagement with these activities in rural or urban spheres?  Share them in the comments!