My current book project, Pregnant Minds and Literary Bodies: Motherhood and Feminism in Spanish Women’s Literature of the Modernist Era (1900-36), builds on the research that I began for my doctoral dissertation and examines literary representations of the mother-role in early 20th-century women writers: Carmen de Burgos, Concha Espina, Margarita Nelken, and Federica Montseny. In addition to their fictional narratives, I also analyze their essays as a way of articulating their ideological approaches to woman- and motherhood. In the process, I reassess first-wave feminism in Spain by focusing on women’s engagement with diverse maternal issues. Many prevalent themes of first-wave Spanish feminism are echoed or visible in today’s post-modern narratives and contemporary debates; thus my book provides a new lens through which we might approach 20th- and 21st-century Spanish literature and culture. Below is the poster I designed when I was in the midst of my initial research at Penn State. The goal was to showcase my research to a general audience of all ages and backgrounds. 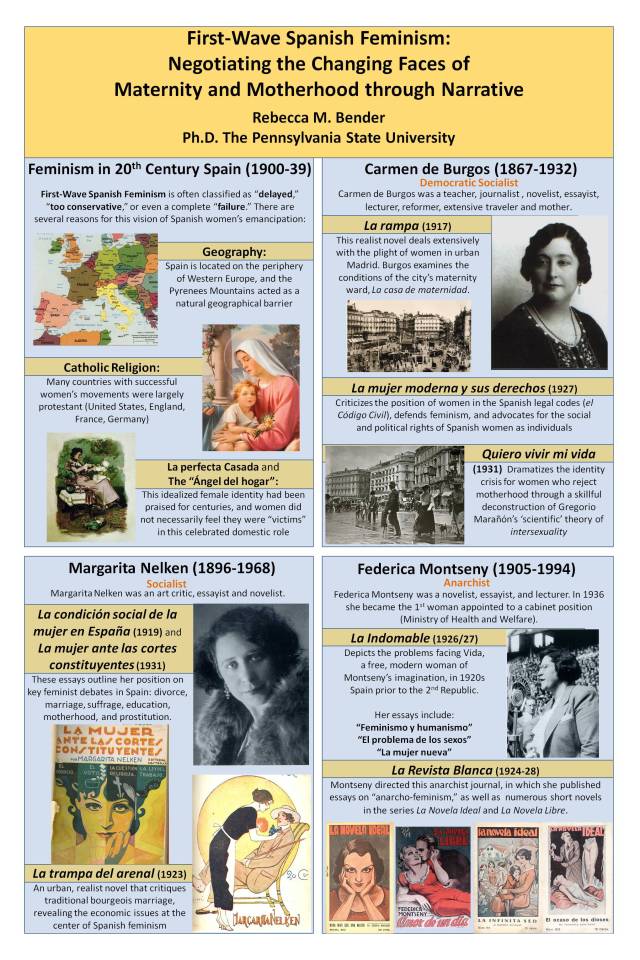 My peer-reviewed article, “Fashion, Ekphrasis, and the Avant-Garde Novel: Carmen de Burgos’ La mujer fantastica (1924)”, was published in the open-access journal Ciberletras in 2017. In this study, I examine fashion in Burgos’s ekphrastic references to 19th-century French portraiture, arguing that her overlooked novel challenges the notion that Spanish avant-garde literature represents an abrupt break from the past. It also validates fashion and make-up as nontraditional feminine artistic mediums while establishing a cultural and historical trajectory of women’s fashion as integral to artistic production. Feministas Unidas awarded this project the 2nd place Adela Zamudio prize in 2018 for the Best Published Essay of 2017 in centered on works of literature and cinema by female authors. You can read the blog-version of the article’s argument here: Fashion and the Fine Arts in Carmen de Burgos’ Avant-garde Novel, La mujer fantástica. In early 2017 I published a chapter in the The Routledge History Handbook of Gender and the Urban Experience (ed. Deborah Simonton), “Modernity and Madrid: The Gendered Urban Geography of Carmen de Burgos’s La rampa (1917).” In this chapter I expand on earlier research pertaining to women’s experiences of pregnancy and motherhood in early 20th-century Madrid, particularly in the Maternity Ward (see “Maternity Ward Horrors” 2012), to examine additional urban spaces in the novel, which are populated almost exclusively by women (examples: the Gota de Leche (a food bank), an orphanage, and a pediatrician’s office).

Related to early 20th-century narratives on feminism and women’s experiences, I published an article on Margarita Nelken, “Theorizing a Hybrid Feminism: Motherhood in Margarita Nelken’s En torno a nosotras (1927)”, with the Bulletin of Hispanic Studies. 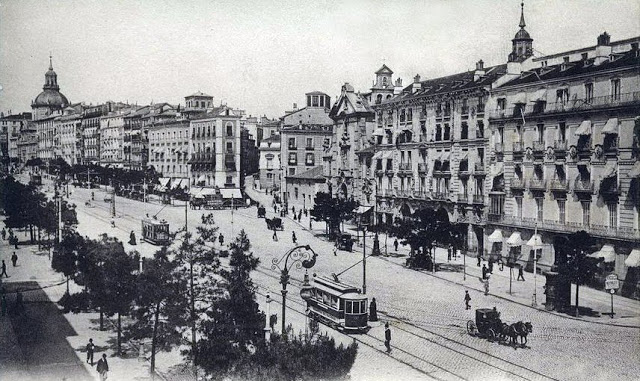 Madrid, 1910 (Calle de Alcala and the future Gran Via). Image via cochesclasicosdehoy.com

I also work on how the Spanish Avant-garde approaches corporeality and the female body. I have written on Ramón Gómez de la Serna’s La hiperestésica (1931) and on José Díaz Fernández’s treatment of the female body’s reproductive potential in La Venus mecánica (1929); the latter appeared in a 2016 volume focused on the body in the Spanish and Italian Avant-garde: Modernism and the Avant-garde Body in Spain and Italy (Eds. Nicolás Fernández-Medina and Maria Truglio).

Finally, my research and teaching projects extend beyond Spain and into the broader Spanish-speaking world. I published a Transatlantic study of race in the Avant-garde poetry of Federico García Lorca and Nicolás Guillén, as well as a short analysis of language in Ernesto Sabato’s El tunel.