Last fall I was asked to review Las Cortes republicanas durante la Guerra Civil. Madrid 1936, Valencia 1937 y Barcelona 1938 for Feministas Unidas Inc., a non-profit Coalition of Feminist Scholars in Spanish, Spanish-American, Luso-Brazilian, Afro-Latin American, and U.S. Hispanic and Latino Studies. This book is a compilation of the written memories of influential Spanish politician and writer Matilde de la Torre (1864-1946), who was one of the first female representatives in the Republican Spanish Courts prior to and during the Spanish Civil War (1936-39). Torre actually penned these accounts of during her exile in Mexico after the civil war, making them a curious mixture of memoir, autobiography, and historical analysis. This  new edition was edited and organized by Francisca Vilches-de Frutos, professor of literature and history at Madrid’s Consejo Superior de Ivestigaciones Científicas, who provides a detailed and well-researched introduction to Torre’s writings.  Since my review was recently published in the Spring (2017) Feministas Unidas newsletter (which is available a a PDF from the Feministas Unidas website), I wanted to create a brief companion blog entry to summarize portions of my review and to discuss a few of my favorite parts of this book. Additionally, given my interests in the development and growth of Spanish cities in the early 20th century, especially the gendered nature of many spaces within these cities, I will also include images of the urban spaces – from the 1930s –  in which these proceedings took place. Finally, there is very little published on Matilde de la Torre in English, and I hope this post will help introduce this political and literary woman to a broader English-speaking audience. 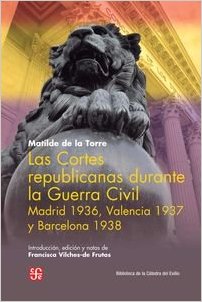 Madrid: Congreso de los diputados. July, 14 1931. Arrival of the provisional government for the opening of the constituent courts. Image via http://www.congreso.es

The second section of the book is dated September 30, 1937, and recounts the Courts sessions in Valencia at the Gothic style Lonja de la Seda building (pictured below), which is today a popular tourist attraction in Valencia. Before narrating these proceedings, Torre notes that this is the first time since the 19th-century Republican Courts in Cadiz that the proceedings would occur under “enemy bomb” (105). Of note from these Valencian proceedings are the pages detailing the discourse of Dolores “Pasionaria” Ibárruri, representing the communist party (124-27), and the disquieting debate as to whether Spain was truly at war or merely in “a state of alarm” (135-39), which Torre summarizes both dramatically and a bit sarcastically: “We are only alarmed. And so,then, ‘this’ is not war. ‘This’ is nothing more than human slaughter/carnage; an inhumane madness; a planetary scandal…” (139).

Finally, the third and longest segment outlines the Barcelona Courts session on September 30, 1938 that took place in the recently restored Monasterio de Sant Cugat (below). It is clear from the tone of Torre’s recollections in this third section that the political situation had become increasingly unnerving; fear and mistrust are perfectly captured when the politicians pause their discussions upon hearing a low humming sound that causes them to fear a possible aerial attack (193-94). While the description of these proceedings are riddled with the words “resistance” and “resist,” the chapter also contains extensive details on the architecture and restoration of the Monastery. Both before and after the proceedings, as well as during a lengthy break in the middle, Torres takes time to describe with appreciation the cultural and intellectual history evoked by the details of the building’s architecture, as well as the ironies of Republicans meeting in a church (“iglesia”).

Monasterio San Cugat, Barcelona, early 20th century. Image via Archivo Zerkowitz (www.zerkowitz.es). Take some time to visit that site and check out the fantastic gallery of images, especially those prior to the 1950s.

From literary and cultural perspectives, many of Torre’s least political observations are the most fascinating, revealing her personality and adding a bit of levity to what could otherwise become dry descriptions of parliamentary proceedings. For example, at one point Torre celebrates the “magnificent Rolls Royce” that chauffeured her to the palace (109), personifying the luxury car with a voice and personality: “Now I serve that woman representative, who I just left at the door of the palace” (111). Later, as one session concludes, Torre observes with admiration the new “style” of fellow diputada Margarita Nelken who, on this particular day, had exchanged her trademark hand-held spectacles for “some beautiful glasses that give her a certain doctoral look” (137).  Her wit and flare for language and writing are apparent in the Barcelona sessions when she cleverly refers to those representatives in disagreement with Juan Negrín as having been “bitten by the Negrinofobe virus” (191).

The interdisciplinary nature of Torre’s memoirs as primary sources will interest scholars of 20th-21st century Spain, particularly in terms of the Spanish Civil War, democracy and dictatorship, and the perspectives and experiences of republican politicians, female representatives, and exiles. And as Vilches-de Frutos states, analyses of Torre’s documents will allow us to better understand the experiences of those republicans who attended the Courts sessions between the tumultuous years of 1936 through 1938. It also affords us nuanced portraits of several of the most important republican political leaders of the time, like Juan Negrín, Diego Martínez Barrio, Indalecio Prieto, and Dolores “Pasionaria” Ibárruri. Torre’s words capture the most relevant facts of these three Courts sessions and, together with the hint of irony and humor with which she imbues her text, afford us valuable insights into individual attitudes towards democracy, the parliamentary institution, the Spanish Civil War, government actions and interventions in times of conflict, and the limits of political power.

If you have time, check out my full review over at Feministas Unidas, Inc and consider becoming a member of the organization, which seeks to create and sustain a national network of feminist scholars in the fields of Spanish, Spanish-American, Luso-Brazilian, Afro-Latin American, and U.S. Hispanic Studies. They publish a multidisciplinary journal, Ámbitos Feministas, each Fall. According to their website, their objectives are to join these scholars

and advocates together to strengthen the intellectual environment in which they work by means of: exchange of ideas and information; cooperative research projects; organization of conferences; preparation and presentation of papers and panels; gathering and dissemination of bibliographical data; interchange of classroom materials and methodologies; assistance with publication; career counseling and mentoring; contacts with feminist scholars in Spain, Portugal, and Latin America; and other appropriate joint intellectual endeavors. Membership is affordable at only $10 for graduate students and instructors, $15 for Assistant professors, and $20 for Assistant or Full Professors.  You can also follow Feministas Unidas updates on their Facebook page.