While I was in Spain last summer (2014), I was able to attend the “Feria del libro” (Book Fair) that takes place annually in Madrid’s central park, El Retiro. According to the Feria del Libro’s (FLM) website, its goals are to promote books, reading, and the work of those businesses and institutions that are dedicated to publishing, distributing, and selling books. I’ll be in Spain again this June/July (2015), but will have just missed the 74th Feria, which was May 29-June 14th. If you are ever in Madrid in early June and have the chance to attend the Feria, you could easily spend a few hours – or even days if you are real book lover – exploring the park and checking out the newest or most popular books for sale from the hundreds and HUNDREDS of displays lining Retiro’s walkways. Many publishers offer special discounts or incentives to purchase books during the Feria – I saved 15% on my purchase, for example. Below is the poster for the 2014 Feria, and you can see the collection of past posters at the Feria del Libro’s “Carteles” page.

The poster for 2014’s Feria del libro, which was designed by Santiago Miranda of Seville. Image via http://www.estandarte.com

After spending several hours wandering around the book displays one afternoon, I ended up buying a fantastic book dedicated to women who lived and worked during Spain’s Second Republic in the 1930s – Mujeres de la II Republica. Historia de la mujer. Tomo I. 1931-39. The Second Republic was the democratic political regime that existed in Spain from 1931 until the end of the Spanish Civil War (1936-1939) when Francisco Franco would take control of the country, establishing a dictatorship that would last for forty years. Since the question of women’s roles in early twentieth-century Spanish society and politics falls right within the focus of my main research projects, I considered the text to be a necessary addition to my bookshelf. In any case, I finally had a chance this past semester to read through the book, and I thought I’d share some of my thoughts on the text, as well as a few other projects pertaining to the Second Republic that I became aware of as I did a bit more research on a few of the women featured.

The first thing I want to mention is that the book provides more of a schematic outline and introduction to the numerous women who participated, to varying degrees, in public life. Thus the volume reads more like a photographic “encyclopedia” of women – artists, teachers, activists, writers, musicians, actresses, and intellectuals – than a detailed historical narrative. This makes it accessible to a more general audience, and in fact the short 2-4 page “chapters” would be perfect reading material for an undergraduate Spanish or Spanish culture course. First, Cristina Valcarce provides a brief, two-page prologue, and from there the volume dedicates 2-4 pages each either to an individual woman or to an issue or concept relevant to Spanish women’s history – “The First Flight Attendants,” “Red Cross Nurses,” and “Women’s Hockey [or] Tennis” for example. In total, the book provides information on 106 different women, as well as 16 unique topics that relate to these women’s participation in Spanish political, intellectual, and cultural life during thirties. The “topics” pages are generally composed of high-quality, original black and white photographs with only brief captions.

I’ll include sample images of a few pages and the often-overlooked women that they feature. I’m hoping to get clearer pictures later this summer when I return home and unpack this book from my office boxes – I hadn’t realized my photos did not turn out so clearly until I put them on my computer – #SpanProfFail! In any case, before I am able to update my files, I though you could get a feel for the book in case you are interested in adding it to your collection or learning about the numerous women who were quite influential in early twentieth-century Spain and Spanish culture, despite the fact that they are not generally featured in dominant historical narratives.

The first woman (above) I’ll include here is Gala (Éluard) Dalí (1894-1982), the wife of renowned Spanish Surrealist Salvador Dalí. As any fan of Dalí (like myself) knows, Gala was not only his lover and wife, but also his muse, appearing in or inspiring several of his most recognizable works. I was happy to see that she was included in this volume, given that her influence on Dalí during the pre-Civil War era was essential to the artist’s overall aesthetic and ideological development. Below are a few examples of Gala in Dalí’s 1940s paintings: 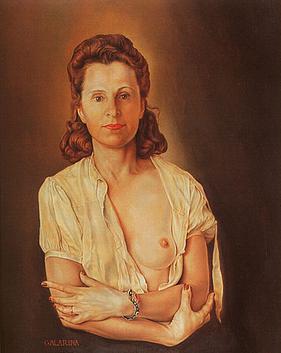 Maruja Mallo, a Spanish surrealist painter who studied and fraternized with her more (in)famous male contemporaries of the Generation of 1927 (pdf),  specifically Salvador Dalí, Federico Garcia Lorca, and Luis Buñuel,  is also included in Mujeres de la II Republica. I have been drafting a blog post on Mallo and her depiction of Las verbenas for some time now, but several publishing projects have gotten in the way of its completion – I hope to post it sometime next year [UPDATE: “Women and the Avant-garde: Maruja Mallo’s ‘Verbenas’ (Carnivals)]. Mallo’s work has in fact been receiving more attention lately, especially from feminist scholars and Hispanists like Shirley Mangini.

Featured in the book is one of Mallo’s most recognizable works is “Mujer con cabra (Woman with Goat)” [below], which she completed in 1929. This painting is distinct for it’s portrayal of a visibly strong, active, and independent woman – “the new woman” – walking outside her home. The woman is presented from a female viewpoint, combining characteristics that were previously considered incompatible from the male point of view: strength, athleticism, and energy, alongside beauty and femininity. Mallo’s “new woman” is capable of taking an active role within Spanish society and outside her home. This was a stark contrast to traditional depiction of femininity in western art that presented sensual and passive women who exhibited little or no energy or free will.

After having read Mujeres de la II Republica. Historia de la mujer. Tomo I. 1931-39, I’m even more excited to continue my work on Spanish women’s contributions to art and literature during this time, as their varied roles and accomplishments are finally receiving more attention within both scholarly literature and popular media. I recently discovered the relatively new, popular television series 14 de abril. La República on RTVE (Radio y Television española), and it appears that women characters have roles that are much more complicated than simply acting as the love interests of male protagonists. I’m putting it on my “to-watch” list this year – maybe it will have some Downton Abby-vibes! Moreover, I just presented a paper on the film Las 13 Rosas (dir. Martínez-Lázaro, 2007) at a conference in Salamanca. My next post will discuss my paper and my time in Salamanca… where I am now! In fact, it’s getting late, so it’s about time to head out for wine and tapas!

What television programs, documentaries, or literature about Spanish women during, or leading up to, the Second Republic and the Civil War have you discovered recently? Have you taught students about these topics in a Spanish culture course? I’d love to hear your thoughts and recommendations!