I feel very lucky to have been able to spend the month of June in Spain, first in Madrid for nearly 3 weeks (with a day trip to Segovia), then in Santiago de Compostela for a few days during a conference, and now in Oviedo and other parts of Asturias where I’m visiting a friend before returning back home to my poor abandoned husband and dogs! While I have been able to use my Spanish daily, eat amazing food and drink lots of red wine, visit the incredible Prado and Reina Sofia Museums in Madrid, and blog a bit about early 20th-century eroticism and breastfeeding in classic art, I also spent a lot of time working on my paper and presentation for the Humanities conference in Santiago de Compostela (which was, in fact, the main reason for my trip!). The conference theme was Hispanic Humanism at the crossroads of print, visual, and electronic communications, and so I had to venture out of my “comfort zone” of early twentieth-century Spanish literature and culture. I decided to work with film, since I had recently seen Pedro Almodóvar’s La piel que habito (The Skin I Live In) (2011). I’d be lying if I said I wasn’t a bit nervous (terrified?) to speak of Almodóvar in Spain – yikes!

I also managed to get a researcher’s card for Spain’s National Library (La Biblioteca Nacional) in Madrid, which was quite an accomplishment! Photo: Madrid, June 2014.

In this post you can read about what the work-portion of my trip entailed, which should be especially useful to those who think professors have the summers “off”. No complaints here, though, since I love that I am able to travel and present creative analyses of film and literature as part of my job. My conference paper (which was written in Spanish) was titled “Los avances médico-científicos como artes plásticas posmodernas en La piel que habito”, or in English, “Scientific and Medical Advances as Postmodern Plastic Arts in The Skin I Live In“. In it, I adopted a postmodern interpretation of new technology as powerful and potentially dangerous artistic mediums. This movie is an extremely disturbing psychological drama, with elements of science fiction and horror films; the plot is nearly impossible to summarize in a concise way (as are the plots of most Almodóvar’s films!). In the most (over)simplified sense, Dr. Ledgard (Antonio Banderas) is a scientist/researcher/doctor who is working to create a perfect, indestructible artificial skin. The audience sees early on that he keeps “Vera” (Elena Anaya) imprisoned in his home, using her to carry out his experiments. In the process, he essentially shapes – or “(re)creates” – her in such a way that she begins to resemble his now deceased wife. As the non-lineal narrative unfolds, largely via flashbacks, viewers learn the shocking story behind Vera. I’m sure you can find a more thorough, spoiler-filled summary somewhere, if you’re interested!

Given that the film reveals a strong interest in the arts, especially through the incorporation of sculpture, classical and modern paintings, music, dance, and even fashion, I wanted to examine Vera as yet another “piece” of artwork – the product (masterpiece) of the “artist”, Doctor Ledgard. This would allow me to look at science, medicine, and new technologies as alternative, postmodern artistic mediums that, nevertheless, found their inspiration in revered masterpieces of the past. In the film, for example, there are two large paintings of Venus by Italian Renaissance painter Titian (Tiziano) that adorn the hallway of Ledgard’s mansion: “Venus de Urbino” and “Venus recreándose con el amor y la música.” The film juxtaposes these sixteenth century representations of the goddess with subsequent images of Vera on the television screen in Ledgard’s room, where he observes her with a watchful, erotic eye. Below are Titian’s paintings, followed by two screen-shots from La piel que habito. 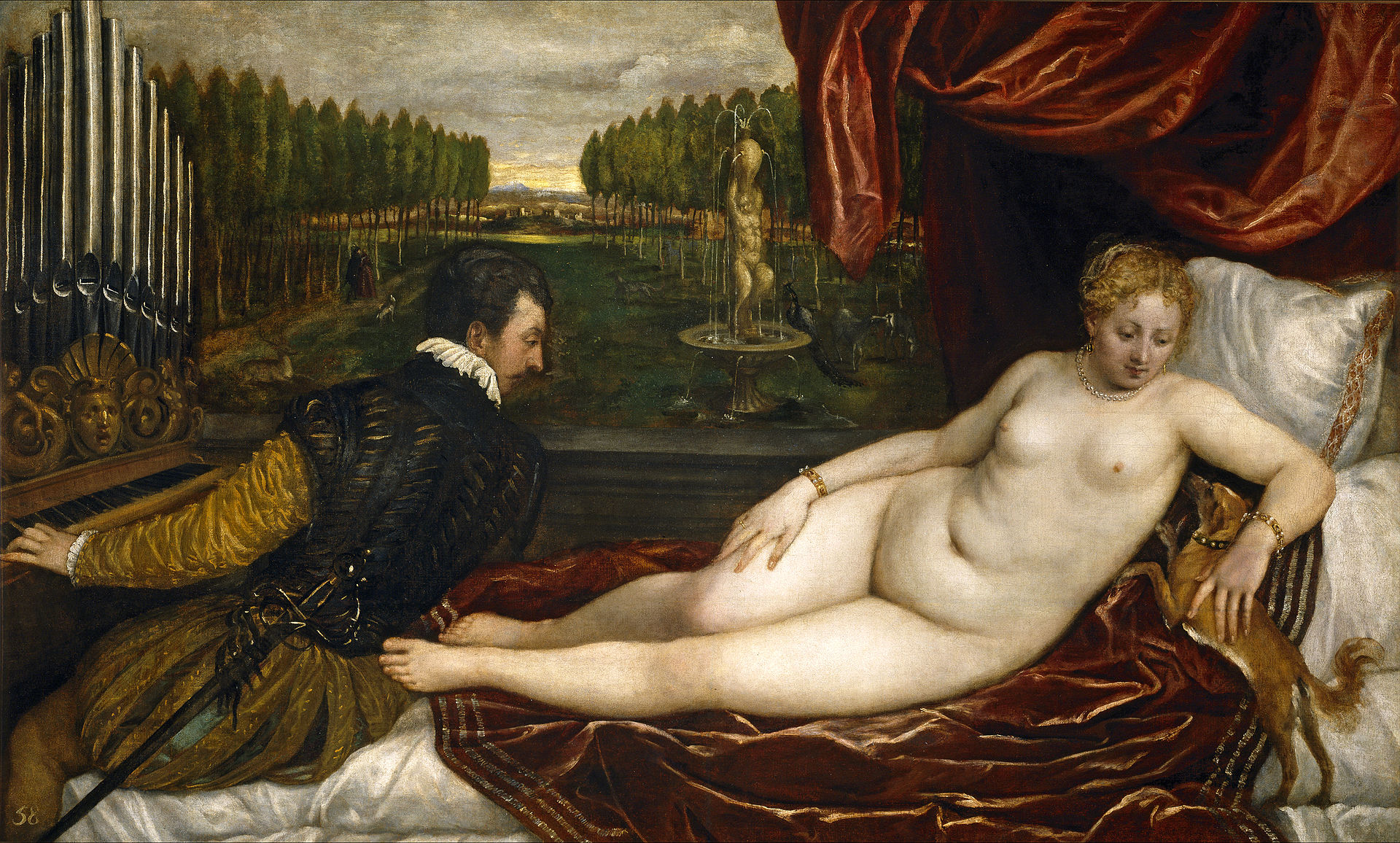 Both of these portraits find parallels in the film – first, Vera is posed in a similar way to “La Venus de Urbino.” Moreover, the “frame” of the television set causes her image – which is essentially one of surveillance – to appear as a piece of framed artwork adorning the wall of Ledgard’s room.

Secondly, both protagonists appear on screen in certain moments positioned such that they evoke the portrait depicting Venus, love, and music (another artistic medium). The representations in La piel que habito that echo this second painting, “Venus recreándose con el amor y la música,” were for me the most fascinating as objects of analysis, given that the imitation/evocation of this classic scene occurs on two levels: first, within the narrative [first image below]; second, in Almodóvar’s direction of the film [second image below].

In addition to these paintings, I also discussed renowned Spanish painter Diego Velázquez’s seventeenth-century rendition of Venus, “Venus del espejo” (1599-1660). This version of the goddess was especially innovative, given that she was portrayed as a brunette, which, at the time, made it a bit more difficult to immediately identify her with the ubiquitous blonde goddess. Moreover, Velázquez incorporates a mirror into the painting, allowing viewers to see that Venus is in fact aware she is being observed (or painted, “created” as a work of art). The mirror’s reflection, however, obscures the details of her true identity and beauty. The reflected image is ambiguous, and thus we are unable to precisely pinpoint or describe this woman-goddess’s complete appearance. 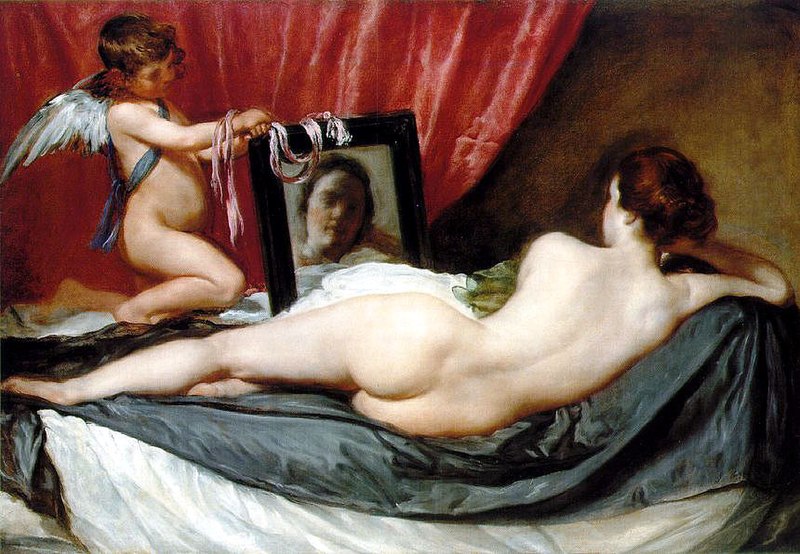 Velázquez’s portrait essentially challenges us to reflect on what exactly we are seeing when we observe a piece of art – how faithfully does art reflect reality, and is it even capable of doing so? In La piel que habito, we see Vera posed in a very similar position – as we can see from the following screen shot, the television monitor on the wall again makes this piece of technology resemble the classic pieces of framed art that hang in Ledgard’s hallway.

In sum, by evoking or incorporating images of female beauty in classic art by way of postmodern parody – either explicitly or implicitly – I argue that Almódovar’s film both celebrates and challenges canonical artwork and the standards of beauty that it has sanctioned. According to Linda Hutcheon in The Politics of Postmodernism, postmodern parody allows us to re-visit the past (both history and art), this time contemplating its associated ideology with a mix of irony, admiration, and criticism (103-04). When viewers see these scenes of Vera in the first 20 minutes of the film, they do not know her history until they piece it together as the narrative unfolds anachronistically (I won’t include spoilers – go watch this thought-provoking, but quite disturbing, film!). Later, when the audience has constructed the back-story, these early representations of Venus – typically associated with the epitome of female beauty, eroticism, love, and the male-gaze – take on entirely new meanings. Thus, my paper suggests that, in La piel que habito Almódovar ambiguously celebrates and criticizes both canonical representations of female beauty, and the powerful capacities of science, medicine, and technology. Below is the final slide of my PowerPoint that compares Vera to the three paintings I discussed. You can view the entire presentation, and read the Spanish paper by clicking on the links under Resources, below (they will download as PDFs).

Vera (as Venus) alongside classic paintings of Venus by Titian and Velazquez.

I’m hoping to expand on this paper by doing more research on the actual paintings (delving into some art history!), including Goya’s famed “La maja desnuda” (1795-1800) if possible. I may also consider the importance that sculpture wields within the film. In the resources below, you can read my conference paper (in Spanish) and view the PowerPoint that accompanies it. I’d love to hear your comments, suggestions, or criticism. How many of Pedro Almodóvar’s 18+ films have you seen? Which is your favorite? If you teach Spanish or film, have you used any in your classes? (My Spanish women’s literature class, for example, recently discussed Volver).