The Dalí Triangle: A Surrealist’s Take on the Catalonian Landscape

Lately I’ve been writing recommendation letters and filling out language evaluation forms for many of my students who are planning to study abroad during the upcoming academic year. Costa Rica… Ecuador… Argentina… Spain… with each request I find myself wishing I were an undergraduate again so that I could spend an entire semester abroad. Somehow it has been 10 years since my semester in Spain (how does time go so fast?!?) and, while I doubt I’ll have the opportunity to spend an extended period of time abroad studying or working in the near future, I will finally have the opportunity to return to Spain this summer for a conference in Santiago de Compostela. The Asociación Hispánica de Humanidades VII Congreso Internacional will take place at the Universidad de Santiago de Compostela, Facultad de Filología, June 26-28, and I am hoping to spend an extra week in Madrid prior to the conference.  In any case, both my jealously of my students’ travel opportunities and my upcoming summer plans in Spain are making me quite nostalgic for my own study abroad experience. So this week I am going to “re-live” it by sharing one of my study abroad highlights: the research I conducted for my undergraduate thesis, “Teaching Language through Culture: A Thematic Unit on Salvador Dalí.”

Not Spain… but this picture would have gotten me sooooo many likes on Instagram, if it existed in 2004. Photo credit: random stranger in Rome.

First, I will preface this post by emphasizing that this was undergraduate “research,” and my understanding of what constitutes research has certainly transformed over the past decade (grad school tends to have that effect, even on an over-achieving undergrad!). For my project, rather than poring over archives or writing away in the library, most of my research time was spent traveling to different towns and museums, taking pictures with my brand new, super-high-tech 3.2 megapixel digital camera, and collecting books, pamphlets, and other realia that might inspire a lesson plan or classroom activity. I was studying for degrees in Spanish and Secondary Education at the time, so my goal was to create an original thematic unit (envisioned as a mini-textbook chapter) that would teach Spanish vocabulary and grammar through a single cultural element: Salvador Dalí. I chose Dalí, my favorite artist at the time, because I thought building creative lessons around his surrealist art and connections to the avant-garde cultural scene of pre-Civil War Spain would capture the attention of even the most apathetic of Spanish language students. I knew that my future high school language classrooms would certainly contain a few disinterested teenagers studying Spanish out of obligation or requirement. To the credit of my 22-year-old self, I have since found this “hypothesis” about how to capture student interest to be correct, both at high school and university levels: Incorporating Dalí’s paintings into my language or literature courses has generated quite dynamic class discussions that include even the shyest, or least enthusiastic, of my students.  One of my most popular blog posts is on my experience bringing Salvador Dalí’s Spanish Civil War paintings and double-images into my course on Textual Analysis, so I thought adding another Dalí piece to my blogging repertoire would be worthwhile.

Teatro-Museo Dali, located in the artist’s hometown of Figueras, Spain. Dali designed this building to be the “most surreal object in the world,” and he chose to be buried in the museum’s crypt.

During my semester in Spain back in 2004, I visited what tourist guides refer to as the “Triángulo de Dalí” in Cataluña (the northeast region of Spain, surrounding Barcelona and bordering France).  Over five days, I set out from Barcelona to visit three small towns within about 2 hours of the city, each of which contains a former residence of, or museum dedicated to, Salvador Dalí:  Figueras, Cadaqués (Portlligat), and Púbol. If you ever travel to Spain and have the opportunity to visit any of these towns, I highly recommend each and every one. While I thoroughly enjoy the Teatro-Museo Dalí in the artist’s hometown of Figueras (above), having visited the museum on two separate occasions, my favorite location from this “triangle” is the town of Cadaqués, a small fishing village located on the Costa Brava. Portlligat, just a short walk up the coast from the town, is where you can visit Dalí’s former residence and studio. It has since been converted into a museum, the Casa-Museo Dalí (below), and today you can wander through the labyrinthine passageways viewing the artist’s former studio and living quarters. For more information about this museum, and each of the museums in Figueras and Púbol, you can skim through the official website of the Fundación Gala-Salvador Dalí, in Spanish, English, or Catalan.

One of the things I enjoyed the most in Cadaqués (in addition to the actual museum-residence) was the veritable “camino de Dalí” created by both the town and the Fundación Gala-Salvador Dalí. Similar to a nature hike in a state or national park, sporadically placed signposts dot the coastal pathways, and each contains a reproduction of one of Dalí’s paintings. These displays are located precisely at the location that appears in, or inspired, each piece. Below are photographs I took of three of these artistic signposts that dot the village. The first displays one of Dalí’s earlier, more abstract surrealist paintings; the pebbled beach of Cadaqués and the rocky Costa Brava make up the background. In this painting, you can also see the triangular rock jutting through the surface of the water (more on this geographical feature below). This signpost, posted on the beach facing the water, allows the viewer to compare the actual view of the beach and sea with the portrayal of this same landscape in this particular painting.

The second example below displays an impressionist-style painting of the picturesque village, the bay, and several fishing boats. If you look on the right-hand side of both the painting and my photograph, you can see the tall white building in the foreground of both images. This makes it apparent the way in which great care has been taken to display these pieces of art in the precise locations that inspired Dalí.

Finally, the third example below is yet another scene of the whitewashed village. This time, however, the town and mountains are far in the background and the bay and fishing boats occupy the central focus of the painting.

If you enjoy photography, art, and/or travel, I highly recommend checking out this book, one of my favorites purchased in Spain: Dalí: El triángulo de l’empordà. Even if you cannot read Spanish, it will be worth your time to skim through the fantastic photography and archival materials that trace the influence of these three Catalonian towns – the three “vertices” of the “Triángulo de Dalí” – on Salvador Dalí’s artistic production, life, and relationships. The book demonstrates how the Catalonian countryside and the Costa Brava impacted Dalí’s work, and there are several side-by-side juxtapositions of the spaces and natural geographic features that have been immortalized in his paintings. Below is an example from my copy of the book:

Sample pages from the book “Dalí: El triángulo de l’emporda”. On the left is a photograph of Cadaques taken around 2000; to the right is a painting of this same portion of the village painted by Dali prior to 1920.

After reading this text, I began to pay especially close attention to the landscapes of my favorite paintings by Dalí.  Below are a few of my photographs from Cadaqués and Portlligat, taken in 2004, alongside some of Dalí’s paintings that contain the same locations, buildings, landscapes, or other geographical features. I have divided the paintings below into two sets. The first are those that contain a depiction of the rock formation “Cucurucuc,” which is visible from any point of the beach in Cadaqués. The second grouping contains paintings with backgrounds that exhibit the contrasting coastal landscape – the calm, smooth waters of the bay against the rugged, rocky coastline at Portlligat.

View of “Cucurucu” from the central beach of Cadaques

In Dalí: El triángulo de l’empordà, Sebastian Roig describes the “islote Cucurucu” as one of the most magnetic of the Bay of Cadaqués, similar to a rhinoceros’s horn rising out of the water; In his paintings, Dalí converted this rock formation into an energetic symbol of the Mediterranean (Roig 118). This geographic feature is apparent in the background of several Dalí paintings, including my own personal favorite, “Dream caused by the Flight of a Bee around a Pomegranate One Second Before Awakening.” 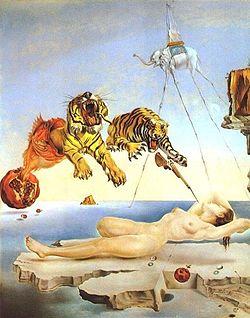 The Bay and Costa Brava


The tell-tale characteristic of the coastline at Cadaqués and Portlligat is the stark contrast between the smooth lines of the calm Mediterranean waters and the jagged outline of the rocky coast. Below are two photographs I took when I visited the Casa-Museo Dalí – the first was taken just outside the entrance of the museum, the second from the hill behind the home as I walked back to Cadaqués.

View of the bay from Dali’s studio and former residence, today the Casa-Museo Dali.

My photograph of the Casa-Museo Dali, Port Lligat, Cadaques

“The Persistence of Memory” (below) is arguably Dali’s most famous surrealist painting, and it also provides an excellent example of how the painter incorporated this particular coastal landscape into both realistic and abstract (surrealist) paintings. It also appears in the ghostly Christmas Cards Dalí designed in 1971. Below are several more paintings that exhibit this typical “Dalinian landscape”.

Overall, visiting the spaces, buildings, and towns that appear in the works of art I most enjoy – whether they are paintings, literary texts, or film – and then incorporating these elements into my lesson plans are two of my favorite things about being a Spanish Professor. In the future, I am hoping to design a short-term study abroad experience around Spanish painters, writers, and architects, and this “Triángulo de Dalí” will definitely appear on my itinerary!

Have you taken students to any of Dalí’s museums in Spain (or to The Dali Musuem in St. Petersburg, FL)? What have been your favorite research- or teaching-related trips?

10 Responses to The Dalí Triangle: A Surrealist’s Take on the Catalonian Landscape