1900s Madrid, in Narrative and a High-Resolution Map

This fall semester I’m teaching three literature classes at K-State, one of which is a seminar I based on a few of my past and current research projects related to early 20th-century Spanish literature. The texts are attentive to the representation of gender and sexuality in urban spaces, and the course is titled Gender & the City in 20th-century Spain. It is anchored by three main novels: La rampa (1917) (The Ramp) by Carmen de Burgos; La trampa del arenal (1923) (The Sandtrap) by Margarita Nelken; and La Venus mecánica (1929) (The Mechanical Venus) by José Díaz Fernández. As we approach midterm, my students just finished La rampa. While we have been discussing  specific representations of gender and urban spaces within the text, I have also been encouraging them to seek out images (photos, sketches, art) that capture the city and its appearance at the height of Spanish modernity, roughly the 1890s-1930s. Of course finding and studying images from this era is important for anyone, it is especially essential for students born in the late 1990s and early 2000s (yikes!). Given that they are reading lengthier narratives full of complex, uncommon, or even antiquated vocabulary in what, for nearly every one of my students in Kansas is their second language, images become fundamental to the mental processing and visualization of a city without motor vehicles, paved roads, or electronic signage.

I am always seeking out new images as I prepare for each class, and in my search last week I found one of my favorite things – A NEW MAP! If you’ve followed blog over the past year or two, you’ll know how much I love traditional, interpretative, creative, and vintage maps. The map I discovered this past week is a high-resolution image of 1902 Madrid, and it’s available free online via the Bibliotheque Nacional de France. The Plano de Madrid y pueblos colindantes al empezar el siglo xx (Map of Madrid and adjacent towns at the beginning of the 20th century), by Facundo Cañada Lopez, is not only a fantastic resource to use in a course like the one I’m currently teaching on urban novels set in 1900s Madrid, but would be useful for courses or research on Spanish Culture or History more generally. This post will be relatively short, as I’m really only writing it as another excuse to spend time playing with the map and put off writing an exam… (!) Although I’m sure I have a few readers who will appreciate a new cartographic resource.

The quality of this map is exceptional, particularly if you take time to zoom in on specific regions or places, although at times it may be a bit slow to load all details clearly. But it’s worth the wait! For example, below is an example (screenshot) of the detailed depiction of Madrid’s central zone, between the Royal Palace and Puerta del Sol. You can see the irregular shape of Puerta del Sol to the right; the large hexagonal appearance of the Teatro Real just to the right of the Royal Palace and Plaza de Oriente (top left); and the Plaza Mayor appears to be drawn with its former green central space included. 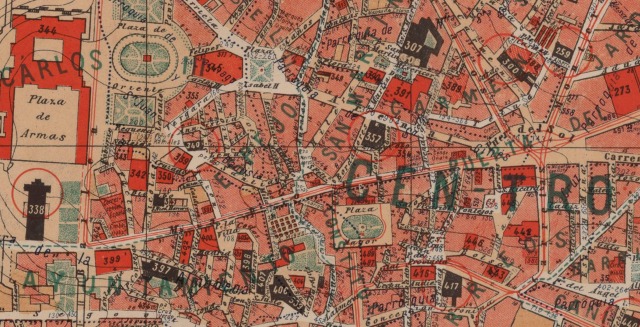 Details of the 1902 map, from the Royal Palace (left/west) to Puerta del Sol (right/east)… with the Plaza Mayor in the center. Screencap of central Madrid, image mine, via BNF.

One of the references in La rampa that led me to find this map was when the characters are taking a carriage ride during Carnaval along the Paseo de la Castellana (the main boulevard connecting north and south Madrid). To indicate the direction in which they are traveling, Burgos’ narrator makes reference to the Hipódromo (Racetrack). I began searching for an image and a bit of the history regarding this location — the Hipódromo de la Castellana — as I had a hard time imagining precisely where it would have been located and what it may have looked like… especially because the novel’s description implies it was on the outskirts of the city; and the “outskirts” of Madrid during the 1920s are very different than those of the 2010s. Below is the description in the novel, followed by the image of the Hipódromo at the “top” of the Paseo de la Castellana:

[The carriage… advanced towards the Racetrack on a wide and silent boulevard, almost without urban development, that seemed a bit like the main roads that open up into the entrance of small towns very faraway from Madrid.]

Details of the 1902 map, from the old Hipodromo (Racetrack) near what is today the Nuevos Ministerios zone; the Paseo de la Castellana runs north/south, connecting this northern part of the city to the central locations south of it, like the Prado Museum and Atocha Station. Screencap of northen 1920s Madrid, image mine, via BNF.

According to Susan Larson, in the footnotes she provides as editor of La rampa, The Paseo de la Castellana, unlike the chaotic and narrow streets of Madrid’s traditional and historic city center, was a wide, open boulevard that passed by more modern, organized city blocks. In the late 19th- and early 20th centuries, it became Madrid’s main societal artery, crossing the north and south of the city and serving as a symbol of scientific progress and rationality (in La rampa, p. 90).  The Hipódromo, built in 1887, and its surrounding spaces, were frequented by the high aristocracy of the early 20th century, until 1932 when the structure was demolished to construct los Nuevos Ministerios, a complex of new Government Buildings and a rail station that would link (via the underground track) Atocha and this new station to facilitate the city’s expansion to the North. 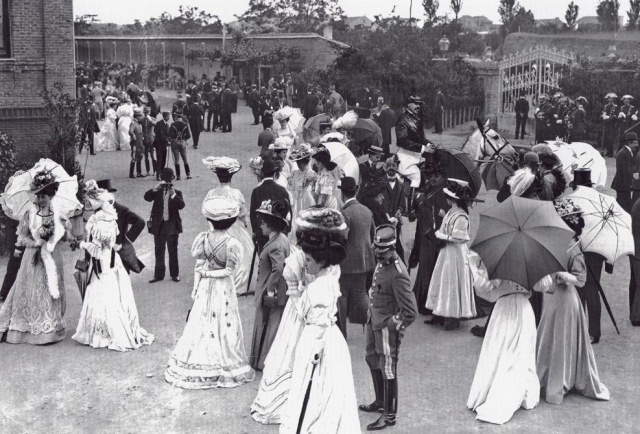 Upper class madrileños enjoying an afternoon outside the Racetrack in the 1910-20s..

The second image and piece of urban history (below) I found after a student had asked about references in the text to the capitalized words “Humanidad” and “Agencia”. In the novel, these terms refer to issues surrounding health, hygiene, and illness, and are juxtaposed with reference to a “Clínica”, which was beyond the economic means and capabilities of the characters in this chapter. In my search for additional information, I came upon the Real Sanatorio de Guardarrama, which opened in 1917 – the same year in which La rampa was published. Below is one of the advertisements. Through both image and text, it boasts a rural, peaceful, and natural location to would improve patients’ health with this new institution, “the first and only of its kind in Spain”: “1700 meters above sea level; great dryness in the atmosphere; many hours of sun.” This is, of course, precisely the antithesis of rapidly modernizing urban spaces like Madrid, full of crowded neighborhoods, constant construction and development projects, and high rates of illness and mortality (infant, maternal, and illness-related).

The information I found on this second health-related topic has been of particular interest to me because of its connection to medical history, and (quasi)medical institutions, which have been central and recurring themes in my research on early 20th-century pregnancy and motherhood. It also reminded me of when I visited the purportedly haunted Sanatorio Duran, a Tuberculosis clinic built at about the same time in the early 20th-century (1915-18), high in the mountains of Costa Rica, with a group of K-State students on a study abroad trip in January 2018. It was one of the students’ favorite sites (mostly for the photo opportunities, the “ghost-hunting” excitement, and the possibility of capturing a ghost with their cameras!), and mine (for the beautiful tiles and old medical equipment, sadly decaying). 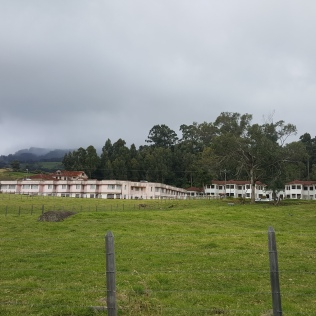 Sanatorio Duran, high in the mountains of Costa Rica

I’ll be writing more about my Gender & the City seminar in the next few months, especially because my class is working on an exciting Digital Humanities project that combines mapping, storytelling, and Snapchat(!), as an alternative to the traditional “literature term paper.” I’m excited to see how these #DH projects will turn out, though it has definitely been a lot of work to organize for the first time. We’re using Northwestern University’s Knightlab storytelling tools, which makes the organization and production of the project run smoothly, even for those with limited tech abilities. My forthcoming article with Hispania is based on my Snapchat-experiment when I taught our Don Quijote seminar here at K-State, and I argue for a re-structuring and re-imagining of second-language (L2) Literature courses and assessments in mid- and upper-level literature courses, which tend to remain core components of most university foreign language curricula. I’ll be blogging about that project in the next few weeks as I learn more details about its forthcoming publication date.

What are some “urban novels” that you recommend, in either Spanish or English? What are some other Madrid-based novels – or short stories – from the early 20th-century that could fit into a future iteration of my Gender & the City course?