Summer in Mexico: Monuments, Murals, and Mole, oh my!

It’s summer vacation! My third since starting this blog…  And while the past two summers I traveled to Spain primarily for professional reasons (to present at conferences), I also made sure to plan my trips to include some vacation time. In 2014 I spent time living in Madrid, blogging and exploring the Prado for several weeks before presenting on Almodovar’s La piel que habito in Santiago de Compostela. I concluded the trip by visiting a friend in Oviedo, which marked my first visit to Asturias. Last year (2015) I attended a conference on Spanish cinema in Salamanca where I presented on Las trece rosas, then traveled to Granada to visit a friend before ending the trip in my favorite city, Madrid. This year, however, I had planned a trip to Mexico for purely “recreational” purposes – no conferences, no workshops, and no research! I almost didn’t take my laptop. Since I don’t have a research paper to share this year, I thought I’d post a few pictures from my trip that relate to topics about which I have previously taught and/or blogged.

First, I picked up this fabulous poster (below) that I plan to frame and hang up in my office – Mapa artístico, turístico y cultural de la Gran República de México, designed by Jorge Escudero de Sybaris. I love the details that depict the cultural diversity and vast geographic scale of a country many students in the US, unfortunately, associate with violence, drug trafficking, and [“illegal”] immigration. If you visit Mexico City in the near future, you should be able to purchase one from one of the many kiosks selling magazines, postcards, and – my favorite – individual cigarettes. You can also order a similar poster-map here from Porrua for MX $100 pesos (or about US $5.00), plus shipping. The second image below is a more detailed look at the imagery, including prominent geographical features, states and cities, famous historical events and figures, and regional products and dress. 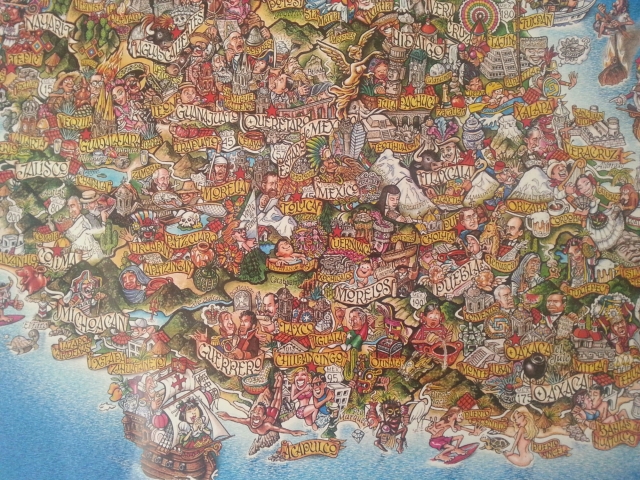 Secondly, I was looking forward to visiting Mexico City’s Palacio Nacional again, specifically to see Diego Rivera’s murals. The construction of the Palace began in 1692 on the site of Moctezuma II’s “new” palace, and the building later became the site of Hernán Cortez’s home and the residences of colonial viceroys. I highly recommend taking the time to see the palace and Rivera’s murals – the structure borders the central Zócalo and admission is free; just make sure to bring your passport or government issued ID to enter. If you are new to Mexican history and Rivera’s murals, I highly recommend paying for a guided tour so that you can better appreciate the historical significance and the complexity of these representations of Mexican cultural history. Unfortunately, on my visit the massive, central mural surrounding the staircase (a triptych containing three panels: “Class Struggle” [left], “The History of Mexico” [center], and “The Legend of Quetzalcoatl” [right]) was undergoing restoration. I was still able to get a nice view of the masterpiece from the second level – but as you can see, my photograph leaves much to be desired. #Fail.

My disappointing photo of Rivera’s three-part staircase mural, including the central “The History of Mexico”, undergoing restoration work.

The above Getty image shows the left portion (“Class Struggle”) and the central pane (“The History of Mexico”). The YouTube video below does a nice job of describing the different sections of this mural and many of the smaller murals lining the Palace’s upstairs hallway. Additionally, this website provides a detailed but brief introduction to all the murals by Diego Rivera that adorn the interior walls of the Palacio Nacional.

Crossing the Zócalo, directly across from the Palacio Nacional, gold and silver shops line the plaza and surrounding streets. In these stores you can purchase (or sell) all sorts of gold and silver jewelry, chains, watches, etc. Among the religious pendants of crucifixes and the Virgin of Guadalupe, I was struck by several flashy gold representations of “Santa Muerte”. I’ve written on my blog about Santa Muerte as a controversial folk saint of death, so these particular pieces fascinated me. The first one below is holding the scales of justice, in addition to the death scythe and a rather large, “diamond”-studded semi-automatic weapon. There were four different varieties of Santa Muerte for sale at this particular store, and they retailed for 600 pesos, or about US $33.00. As I type this and caption my pictures, I’m starting to regret  not purchasing one… (some pricey ones are available on Amazon).

Four different versions of “Santa Muerte” to go with any ensemble. Image mine.

During our first full day in Mexico City, we walked about 3 miles from the historic center down the Paseo de la Reforma to the Castillo de Chapultapec (Chapultapec Castle). The Castle is surrounded by a large park (Bosque de Chapultapec) and sits on a hill, offering beautiful views of the city in any direction. Each time I visit Chapultapec I think about Rodolfo Usigli’s play, Corona de sombra, which I have taught in introduction to Hispanic literature courses. If I have the opportunity to take students to Mexico in the future, I’d love to design a course on Mexican history that would include this literary text, combined with a visit to Chapultapec, as a means of approaching 19th-20th century Mexican history in Mexico City from the unique “anti-historical” perspective Usigli’s drama offers.

View of Mexico City from Chapultapec Palace. Image mine.

Inside the palace are several amazing murals by renowned Mexican muralists David Alfaro Siqueiros and José Clemente Orozco — Photographer Margaret Metcalfe has a wonderful site with beautiful photographs of these Chapultapec murals. However, Gabriel Flores Garcia –  who is much less ‘famous’ than Orozco, Siqueiros, and Rivera – painted the mural that boasts the most dramatic placement on the ceiling above the main stairwell. This mural is dedicated to six young cadets – teenage soldiers between the ages of 14-19  referred to as Los niños héroes – who died defending Mexico City in a battle against the US during the Mexican-American war in 1847.

Chapultapec Castle’s impressive stairwell. A portion of Gabriel Flores Garcia’s ceiling-mural honoring the Heroic Boy Soldiers (Los niños héroes) who died defending Mexico City in 1847 is above; to the left is a portion of Orozco’s mural of the Mexican Revolution. Image mine.

On our second day in Mexico City we decided to visit the pyramids at Teotihuacan, about a 45 minute bus trip outside the city. We ended up taking a tour that included several stops – first, the Plaza de las tres culturas (Three Cultures Plaza), then the Basilica of the Virgin of Guadalupe, and finally Teotihuacan. There are many places in Mexico City offering such guided tours and they tend to cost between US $25-50, plus tips. We took a tour offered through the youth hostel off the Zócalo, just behind the Cathedral (Mexico City Hostel).

Entering Teotihuacan – view of the Pyramid of the Sun. Image mine.

Archaeologists date the origins of the ancient city of Teotihuacan, located about 30 miles outside of Mexico City, to somewhere between the 1st and 7th centuries A.D. The city owes its Nahuatl name – meaning “Place of the Gods” – to the Aztecs, who came upon the abandoned city and its impressive structures in the 14th century. The original Mesoamerican city was an immense urban center, thought to have contained a multi-ethnic population of about 200,000 at its peak (375-500 A.D.). However, archaeologist are still uncertain as to the precise civilization that actually built the city. Regardless, the city’s art, architecture, and religion would influence  all subsequent Mesoamerican cultures, especially the Aztec Empire. Today, the ancient urban center is on the list of UNESCO World Heritage sites, and it is a must-see if you visit central Mexico. The Pyramid of the Sun is the third largest pyramid in the world, at 75 meters, or 245 feet high (although, this is only slightly over half the height of the Great Pyramid of Giza in Egypt, which is over 140 meters tall). The smaller Pyramid of the Moon is about 43 meters, or 141 feet tall, and the two structures are connected by a wide boulevard known as the Avenue of the Dead. I’m linking to two websites that provide excellent information about the Teotihuacan and its history: Aztec-History.com and The Ancient History Encyclopedia. I used images of Teotihuacan when teaching Julio Cortázar’s “La noche boca arriba,” a short story in which the Aztec practice of human sacrifice atop stone temples features prominently.

View of the Pyramid of the Moon from inside the city ‘streets’. Image mine. 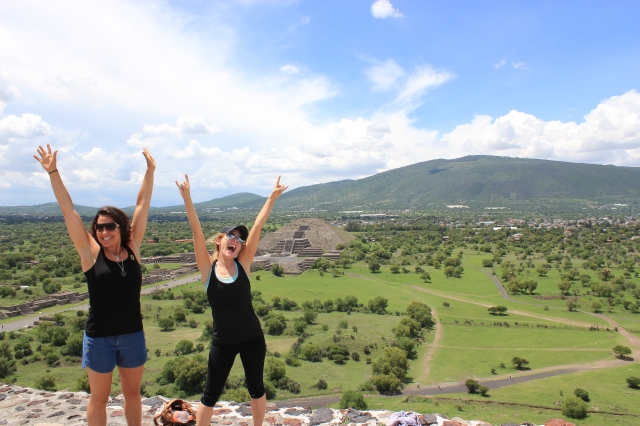 And last but certainly not least….I was able to eat so much MOLE!!!! The sheer variety of mole created in Mexico is astounding, and every restaurant has a different recipe. Below is  my meal from “La casa de las enchiladas,” where you can build your own enchiladas – just pick the tortilla, filling, sauce, and toppings. My three chicken enchiladas, wrapped in blue corn tortillas, were topped with Mole Poblano, Mole Verde, and salsa Encacahuatada, which is a mild chile and peanut sauce. All three enchiladas are topped with onions, cilantro, Oaxacan cheese, and sesame seeds. Combined with a Michelada after our long walk to and through Chapultapec, this was one of my favorite meals in Mexico City. 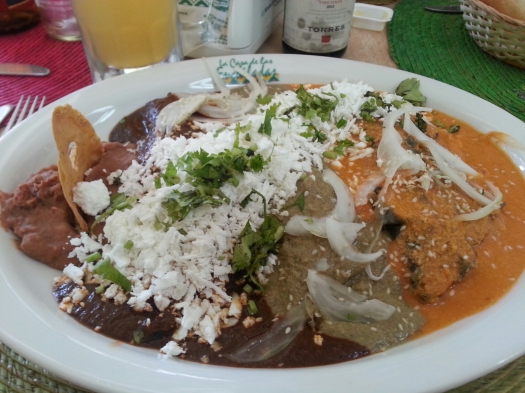 Now that I’ve managed some productive procrastination, I suppose it’s time to get back to work planning this weeks’ classes and assignments for my summer literature course.

Have you traveled to Mexico City with students (study abroad), for a conference or workshop, or simply for fun? What are some of your favorite places?

3 Responses to Summer in Mexico: Monuments, Murals, and Mole, oh my!